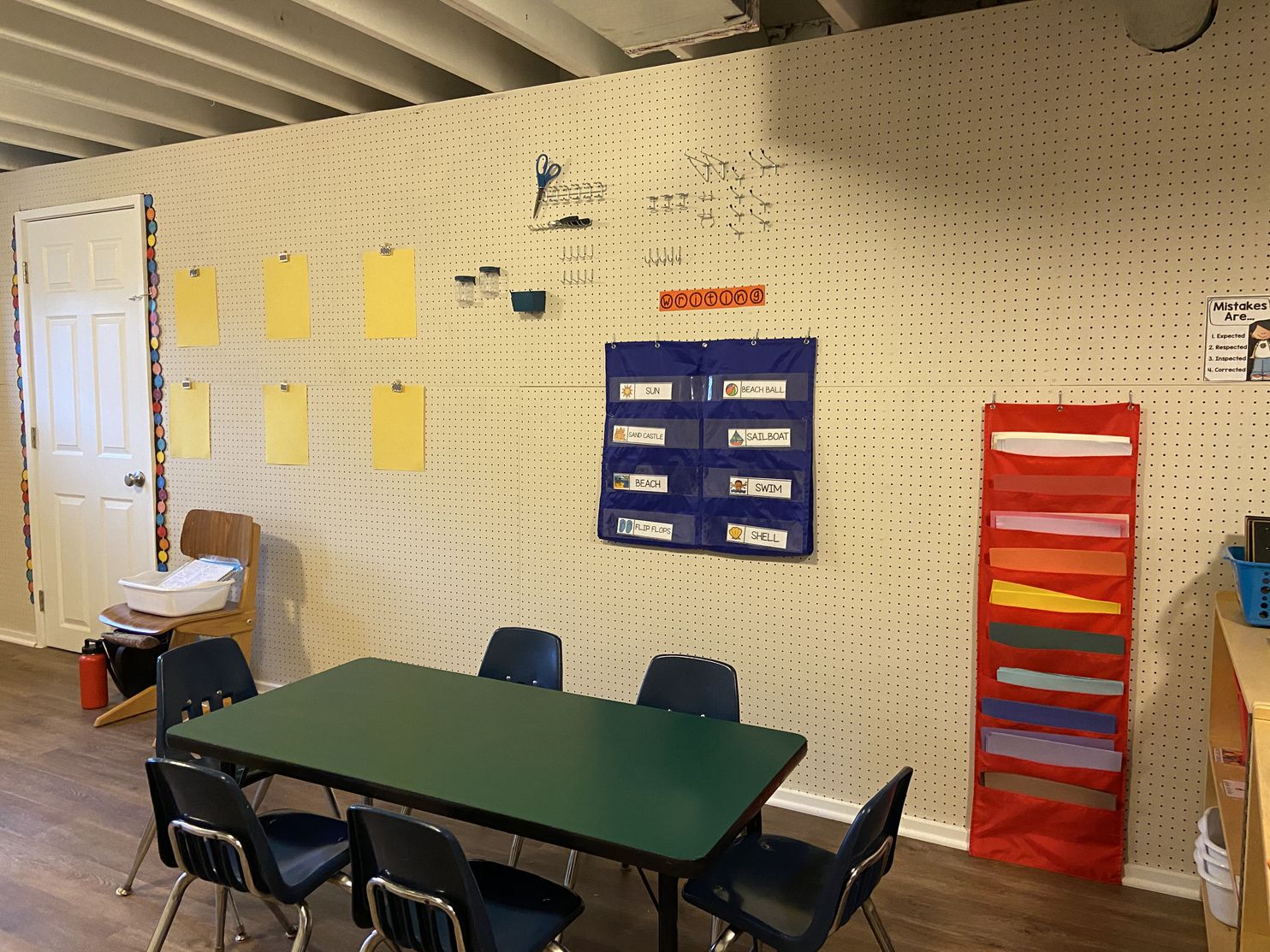 Most parents are good at managing difficult circumstances, but the in-home schooling situation brought on by the coronavirus is in a class by itself.

Mariana Parodi McCormick, of Parodi Educational Consulting in Bethesda, Md., likens parents during this pandemic to ducks in a pond: They look calm as they swim about, but under the water’s surface, “they are paddling like crazy.”

When schools and offices stopped in-person operations in the spring, parents had no time to plan. The dining table suddenly became the school desk, office work surface, toy table, eating place and catchall. The table, and the home routine, were a hot mess.

Becky Eisen and Adam Kutcher are doing that. Eisen says that when they realized “the pandemic is not going away” anytime soon, they began creating a basic school space in the basement of their Baltimore home, finishing it just in time for the start of this school year.

Eisen and Kutcher bought two adjacent rowhouses in 2013 through the city’s Vacants to Value Program. They acquired the vacant, severely deteriorated buildings for a low purchase price, committing to renovate them within a certain time period and to occupy them. After obtaining financing, they began renovation in 2016, combining the two properties into one home. The basement of one unit, a heated and air-conditioned, unfinished storage area, became the school space.

The couple joined with two other families, all three with children ages 3 to 5, to form a school “pod.” They hired a furloughed teacher to teach the two age groups, bought furniture at a bargain price from a nearby private school that closed, and prepared the 15- by 40-foot schoolroom on one side of the basement. The work included installing vinyl flooring (LVF) on top of the existing concrete pad, sealing cracks between the ceiling and the first-level flooring for sound control, adding framing and drywall, painting, building closets along one wall, constructing a small partition that encloses a quiet corner, and installing two full-size windows for extra sunlight.

Kutcher and Eisen may add soundproofing foam overhead, but they are leaving the ceiling open for now; that way, once they determine what overhead lighting may need to be added they will be able to make the change easily.

By connecting to the sewer line and kitchen water pipes, they were able to hook up a standard laundry sink for hand-washing and cleaning. The children will use the first-floor powder room as a bathroom.

A couple of days before school started, Eisen says the parents “did a deep clean” of the space and all the school furniture and other items, such as wood blocks, they’d purchased and transported from the school.

They arranged the schoolroom under the guidance of the teacher. The morning meeting area is against one wall, the quiet spot is tucked into a cozy corner, and tables for writing, reading and other activities sit under the big, new windows. A foldout unit with low shelves became an arts and crafts station. A small table next to the sink is a handy place for the kids’ water bottles, snacks and a drying rack for the plastic dishes.

Inviting books are displayed on bookshelves, and the closets stow supplies. Materials used daily are organized into small, inexpensive bins and in pockets hung from an existing pegboard wall. The teacher will toss dirty toys into a designated bin for cleaning.

Using old paint samples in colorful shades, the parents painted the six cubbies they’d purchased from the school and attached them to the basement wall just outside the classroom; the children will enter the exterior door to the utility room each morning, follow a path bordered by colorful curtains and put their coats and shoes in their assigned cubbies before entering the classroom.

The three families will trade off bringing snacks and doing end-of-day cleanup. One of the parents is providing after-school care.

Parents can pick up the ABCs of good home “school” spaces from teachers as well as other education specialists, remodeling contractors and designers, home-schooling websites and other parents who share lessons learned. Sauri, for one, recommends three ground rules: Every member of the family — kids and parents — has a right to appropriate space at home; the bedroom should be avoided for distance learning or work because it is the place for rest; and no other area is sacred in the house, including the rarely used living room or dining room. Consider these rooms to be found space, which could be turned into areas for work, study or recreation.

Craig Durosko, founder and chairman of Sun Design, an architectural design-build firm with offices in McLean and Burke, Va., adds that formerly single-use rooms often are organized these days into multiple zones, which can include homework or play areas.

Three Sun Design clients are modifying their homes to accommodate in-home learning and socially distanced activities. As part of a first-floor remodel, one family built two wall-facing desks flanking a fireplace, to reduce distraction but keep everyone close by in family space. (They considered putting the desks in another room, with glass-paned barn doors to lend quiet but retain a visual connection.)

Another family finished a large basement with multiple activity zones, including a homework area, built-in cupboards, and shelves and a nook; all the basement spaces are neutral in style so they can be adapted easily to different uses over time. And in a third house the kids do their schoolwork in a room off the kitchen, while basement space has been set up with an office for the parents, and a small home gym complete with rock wall for those days when the kids are … climbing the walls.

Sauri says basic components of a good home-school space are good lighting; soundproofing (or at least noise-canceling headphones); built-in storage, either new or repurposed; and an upgraded Internet system, such as a mesh WiFi network, to assure “strong, clean Internet” throughout the house.

It’s important, McCormick says, “to find one dedicated space” for doing in-home schoolwork, and to design it with the children’s ages in mind. Retired pediatric occupational therapist and teacher Cathy Deitch says that, especially for young children, the school space should use furnishings and other items to delineate spaces and traffic flow, including a place where the children can gather and sit on a flat rug; work and activity areas; open and closed storage; and a calming, softly lighted little spot away from distracting sights, sounds and activity.

Chairs must be the right height for the children, allowing their knees to be at 90 degrees and their feet to be flat on the floor. Table height should enable children to rest their elbows and entire forearms on top. Inexpensive tables with adjustable legs are available.

When they have helped plan the space the children will “feel ownership” of it and be as independent as possible in navigating from activity to activity. (Trays are better than baskets for some items, says Vicens, because they keep things neater, more visible and more likely to be used.)

“Children benefit from consistency,” says Vicens, whether it is the physical setup of the home-school space or the daily routine. Decide on a schedule, based on the children’s age and school program, and post it on the wall. For groups of young children, the school day may start with a morning meeting and move on to time periods for instruction, individual work and group activities such as listening to books read aloud or projects in which the older kids help the younger ones.

Build short breaks into the day — more frequent ones for young children — and designated times for lunch and active play. On days when going outside is not an option, devise indoor ways to let off steam, says Vicens, such as going up and down stairs, playing hopscotch, walking on a line made with painter’s tape or doing jumping jacks and other exercises. Make it fun. Teens might be content to sit with their phones or computers, but it’s good to get them up and moving, too.

McCormick says the whole family should agree on the rules and roles, ideally before the school year begins. Establish the schedule of responsibilities, including which parent will assist with what activities and at what times. That way parents can program child supervision, support and engagement into their workday, and children will know when each parent or caregiver is going to be available.

“Front-load your boundaries,” McCormick adds. Use red and green cards outside the home office, for example, to signal to children when it is or isn’t okay for them to come in.

As for the home-school space, McCormick suggests a trial run to make sure kids know where things are and have the rules — such as putting things away and cleaning up — down pat. Vicens agrees, adding that you can “assess as you go,” and make changes to fix what’s not working.

Don’t be too hard on yourselves, she says. Parents and children should just do their best. “We need to cut everybody some slack in these covid times.”